Tasco was born and raised in Southeastern Oklahoma. Born in Idabel in 1981, Tasco was brought up in an area of Oklahoma that has a mixture of races and cultures. McCurtain County consists of a couple big towns and many small towns all in close proximity. Growing up with an African American father and a Caucasian mother proved to be a challenge but was filled with rich cultural knowledge. Teague Spencer mostly gained his LOVE of music from a very young age (around six years old) by watching his father entertain family and friends by rapping over a beat or dancing and sometimes both. It was the love and respect of his audience that made each performance special and unique. People didn’t have a lot of money or material things and most didn’t have cable. A person would be fortunate to even have a radio. Times were tough but families were close. Along would come D. Cherry to brighten up the scene and have everybody smiling and having a good time in no time. Tasco never forgot about the positive reactions that everyone always displayed when his father would light up the scene. Tasco grew up listening to a variety of music and realizing early on that good music is good music no matter the genre. Teague had no problems with school work or activities growing up. He loves a mental or physical challenge and was ultimately drawn to poetry like a moth to light. Teague Spencer does have poems published on poetry.com before 2012 search) and started his love for structured writing from the beginning of his teenage years. Those times were filled with dynamic music to listen to but Tasco and his homies freestyled over any and every piece of music that hit the same air they was breathing. This never left Tasco even as he graduated high school, entered the army(junior year at 17), and went on to college. He started out recording in a closet studios with cassette tapes, later moving up to computer recordings, and sending demos to every label or contest that he could find on the internet. Through hard work and determination, Tasco has participated in local shows and produced several mixtapes. When he met J.M.E they both knew there was something special happening with their music, not to mention they have a brotherly bond. Tasco and J.M.E have put into action a musical movement that has proven to be solid. Dizobedient has been working hard to elevate their status in the music world from day one. 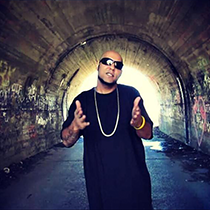